The physical product was awarded a Red Dot Design Award for its fresh and original approach to designing child restraint systems (CRS). One of the features incorporated a mobile application to help aid the user through the installation process.

The Problem – Children travelling in car seats incorrectly is becoming a growing habit!
For any parent or carer, installing a child car seat can be a complex and challenging experience. A study by The Independent in 2016 showed that two thirds of children travelled in a seat that was not installed safely. The truth is, the process in which a seat is installed can often be confusing and unclear. 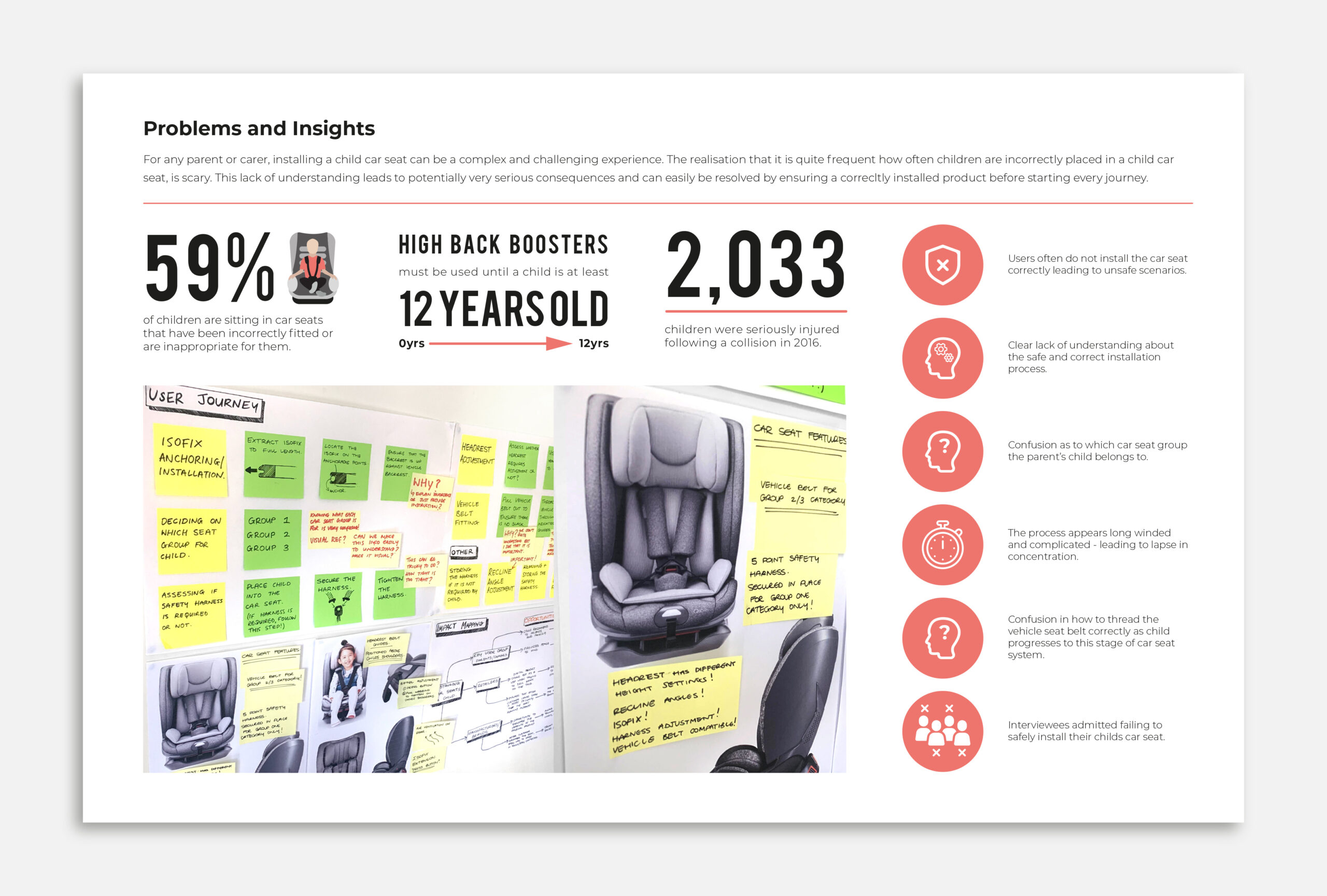 Understanding the user’s requirements and goals through design led research.
The first task was to facilitate a workshop with stakeholders who would engage with the installation process. We started by identifying the step by step process, with the goal of understanding how the user’s journey of installing a car seat would take place. By interviewing the stakeholders directly, this immediately enabled them to pinpoint where their pain points were in the process.

We were able to successfully identify what the users understood about the installation process, whether they encountered any difficulties and steps of the process which they felt could be enhanced or better explained, to improve their journey.

By carrying out this style of interaction with the users, it enabled me to cover a wider spectrum of potential stakeholders to ensure that a thorough understanding of the user’s needs would be clarified. 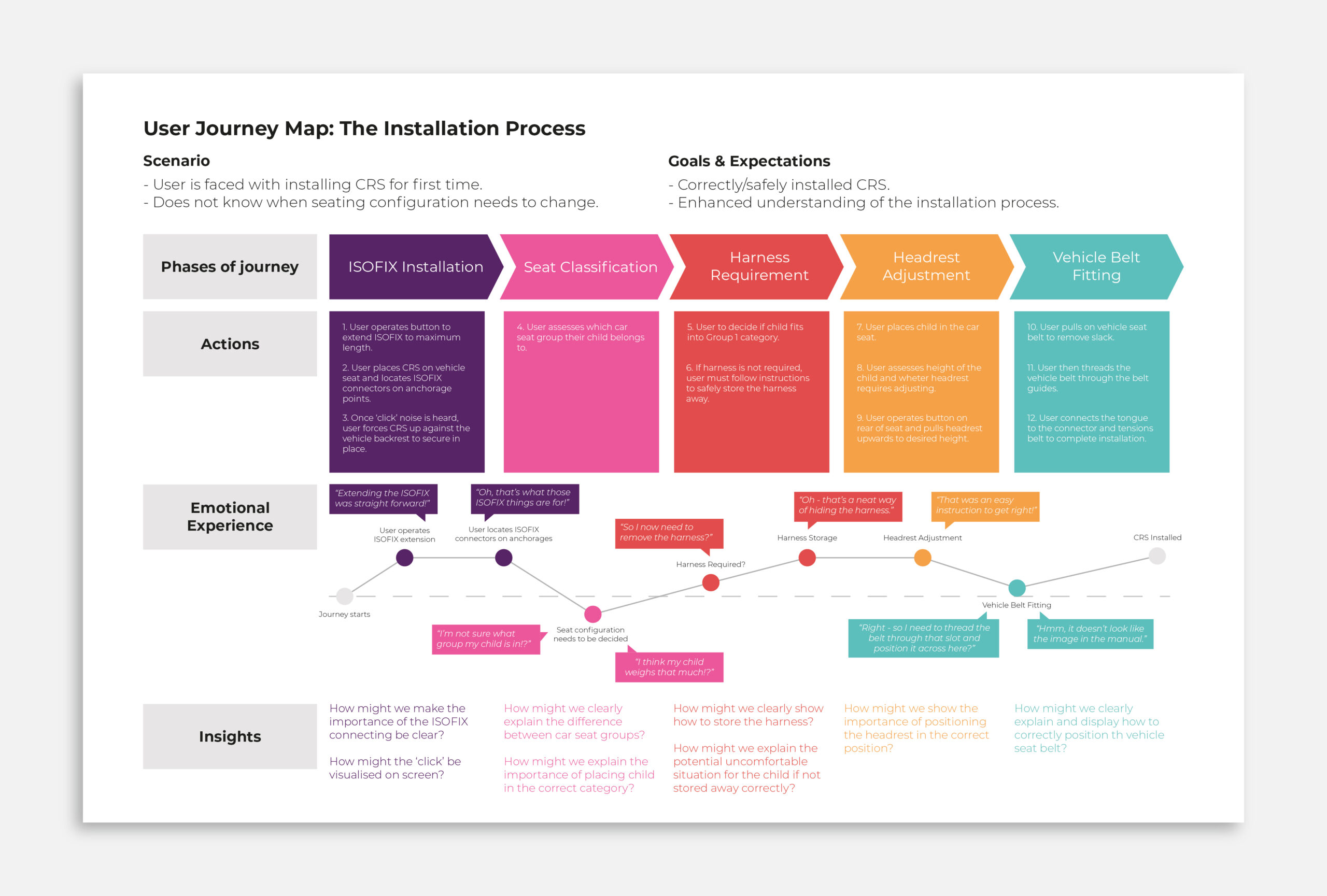 Defining the primary users.
The user research helped to clarify a set of personas. These were referred to throughout the design process. Each persona had a set of realistic goals that would help address their frustrations. 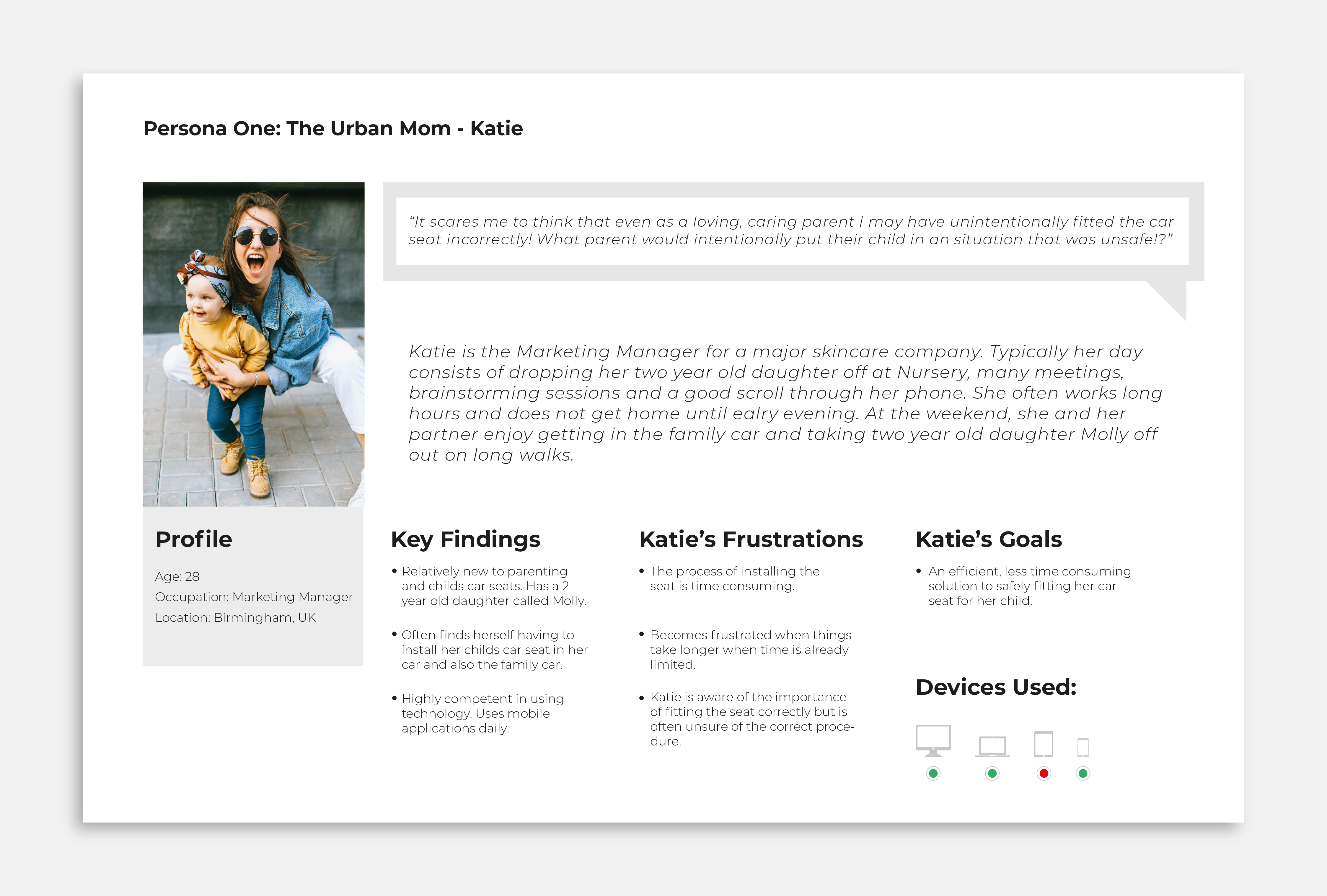 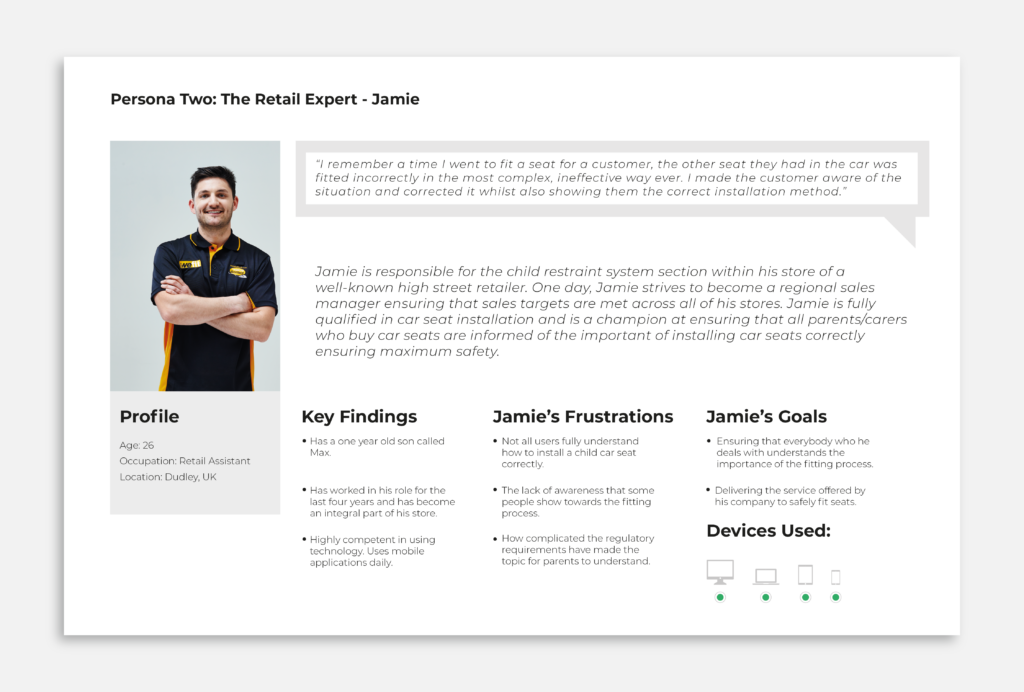 Creating a solution to address the problems.
To help decide the parameters of the application, a user flow diagram was created. This provided a clear, concise map of how the design would be constructed. I found the user flow diagram to be a good way of keeping the journey simple whilst maintaining that the users requirements were also met. 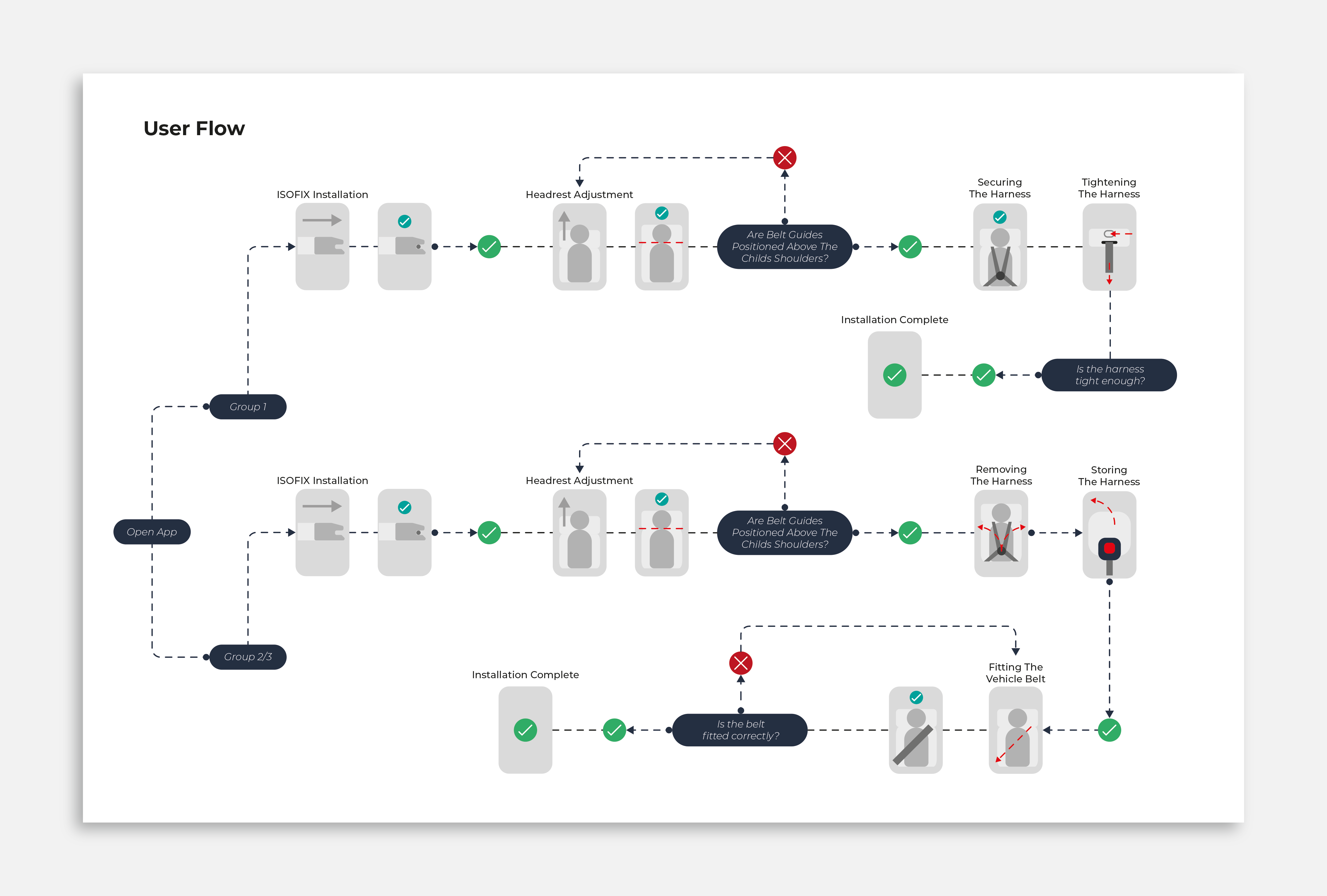 Next, a series of rapid sketching sessions were completed to generate solutions. This resulted in a wide range of design concepts. Users were able to highlight and identify any preferred design ideas. This was particularly insightful as it helped to trigger further solutions to the stakeholder’s pain points.

The designs were then generated into wireframes, which were presented to the stakeholders for them to test and provide feedback on. I user tested the wireframes using a combination of:
– Internal critiques for initial feedback.
– Real users testing a walkthrough of the app.

At this phase of the design process, early user feedback was crucial to eliminate pain points and enhance usability.

Findings:
– A clean, minimal aesthetic was important to help the user focus on the important detail.
– Remove unnecessary features that do not help the user.
– Providing clarity around areas that are difficult to understand is reassuring for the user.

Constructing a recognisable instruction.
One piece of useful feedback from the stakeholders was that they felt the app could benefit from ‘instruction manual’ style illustrations to help communicate the processes involved. They made this judgement on the basis that almost every user of the app would be able to relate and understand the instructions easily.

Implementing the final design.
Once the basic architecture was decided upon and the journey throughout the app was intuitive and coherent, the wireframes were developed into a higher fidelity prototype.

Unnecessary UI elements were removed and all design elements were made consistent throughout the app to ensure a clean and concise design. A strong typographical hierarchy contributes to high readability. Throughout this stage the app was tested by the key stakeholders.

1. Sign Up
A sign up screen gives the brand an option to keep the user up-to-date with regulatory changes, new products and other necessary notifications.

2. Choose Group
The research studies identified that the biggest pain point related to users not understanding which car seat group their child belonged to. By making the factual information simple and clear, it allows users to select the most appropriate group for their child – in turn resulting in the correct installation method being displayed in the following steps. 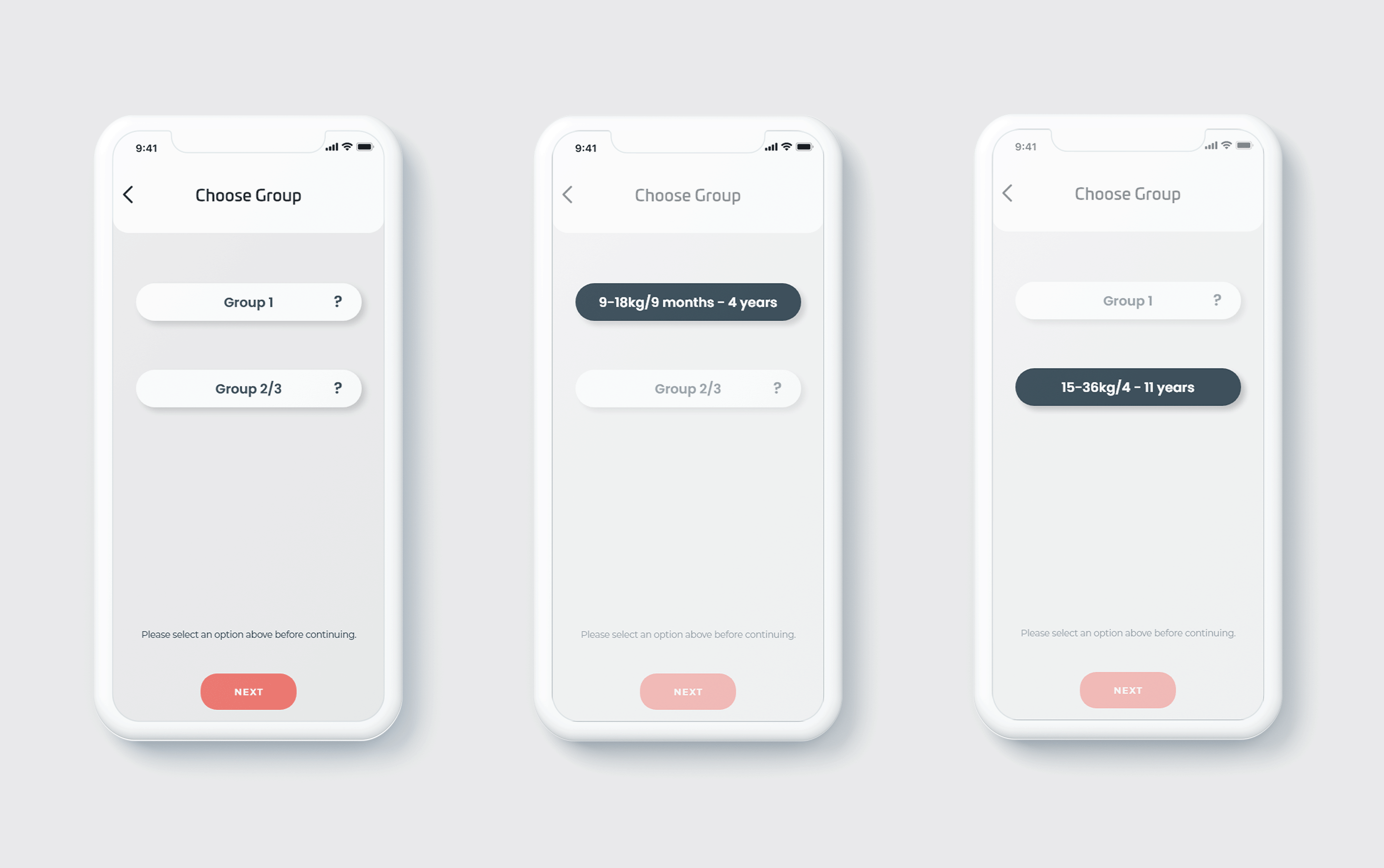 3. ISOFIX Installation
The ISOFIX installation method is condensed into three easy steps – making the process more streamlined and easier to complete. The third step features a call out command which indicates the sound the user should identify to ensure the seat is fixed to the anchorage points. At vital stages of the installation process – a caution symbol will appear. This helps to highlight the importance of this step. 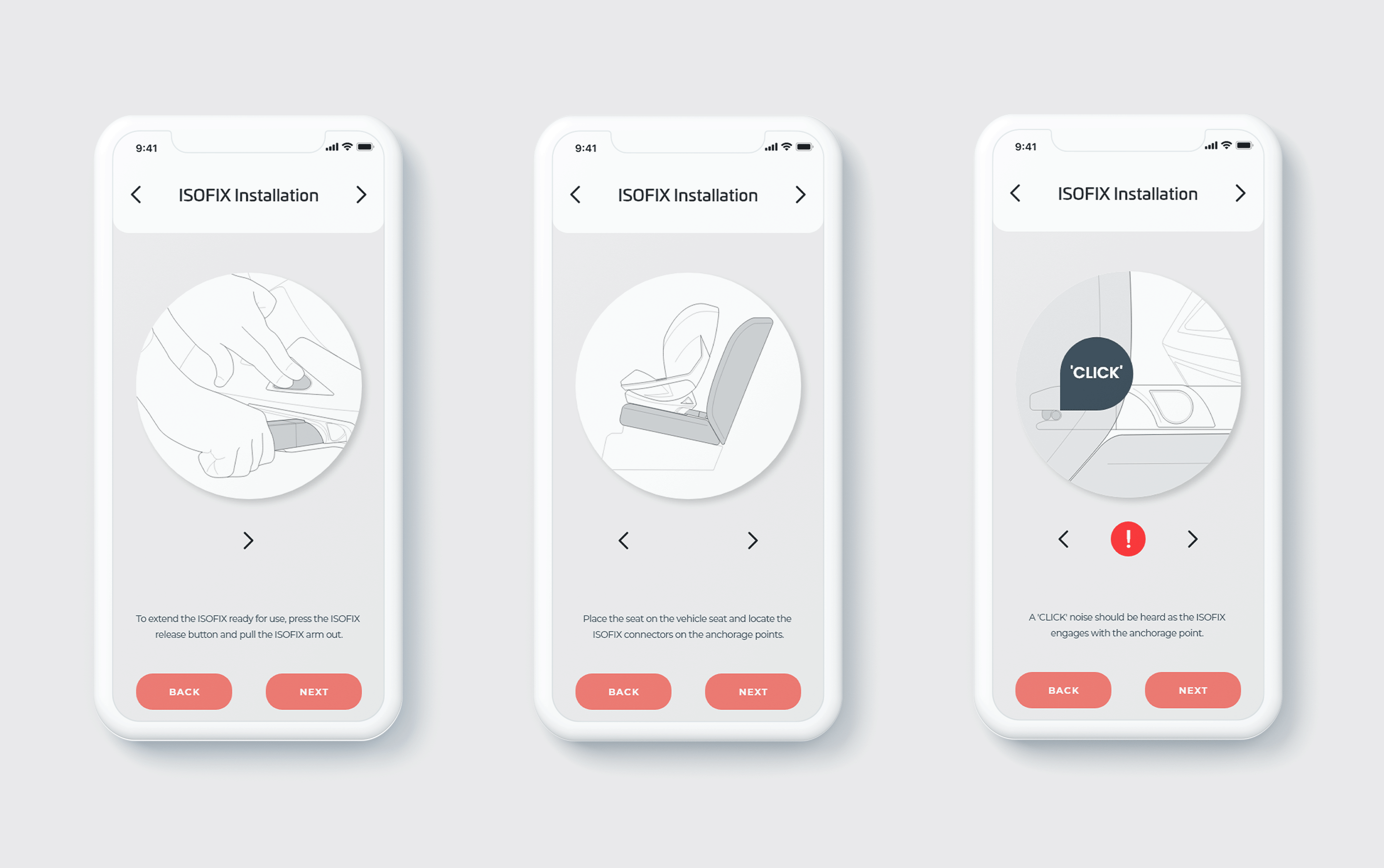 4. Harness Adjustment
This stage was identified as being a complex stage of the user’s journey. Therefore, it requires more instruction to guide the user. It also includes a feature to guide the user in customising the tightness of the harness.

5. Headrest Adjustment
Adjusting the headrest is another vital stage of the installation process. To ensure usability, this stage has been simplified into three simple steps. The caution symbol has also been utilised here again to signify its importance. 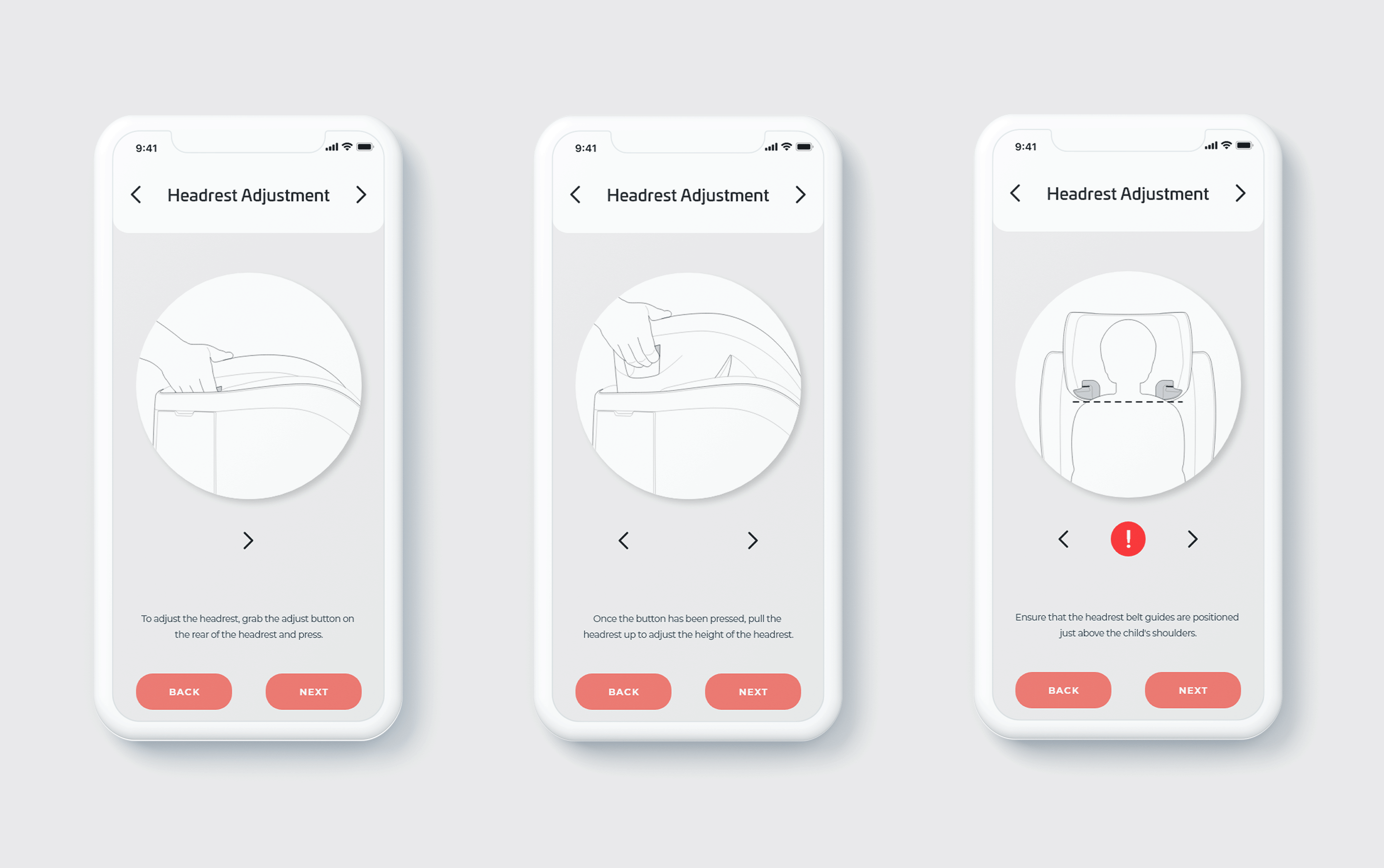 6. Recline Adjustment
To finish up the user has the option to recline the seat. Once navigating past this step – a confirmation symbol appears to confirm that the user has successfully completed the process. 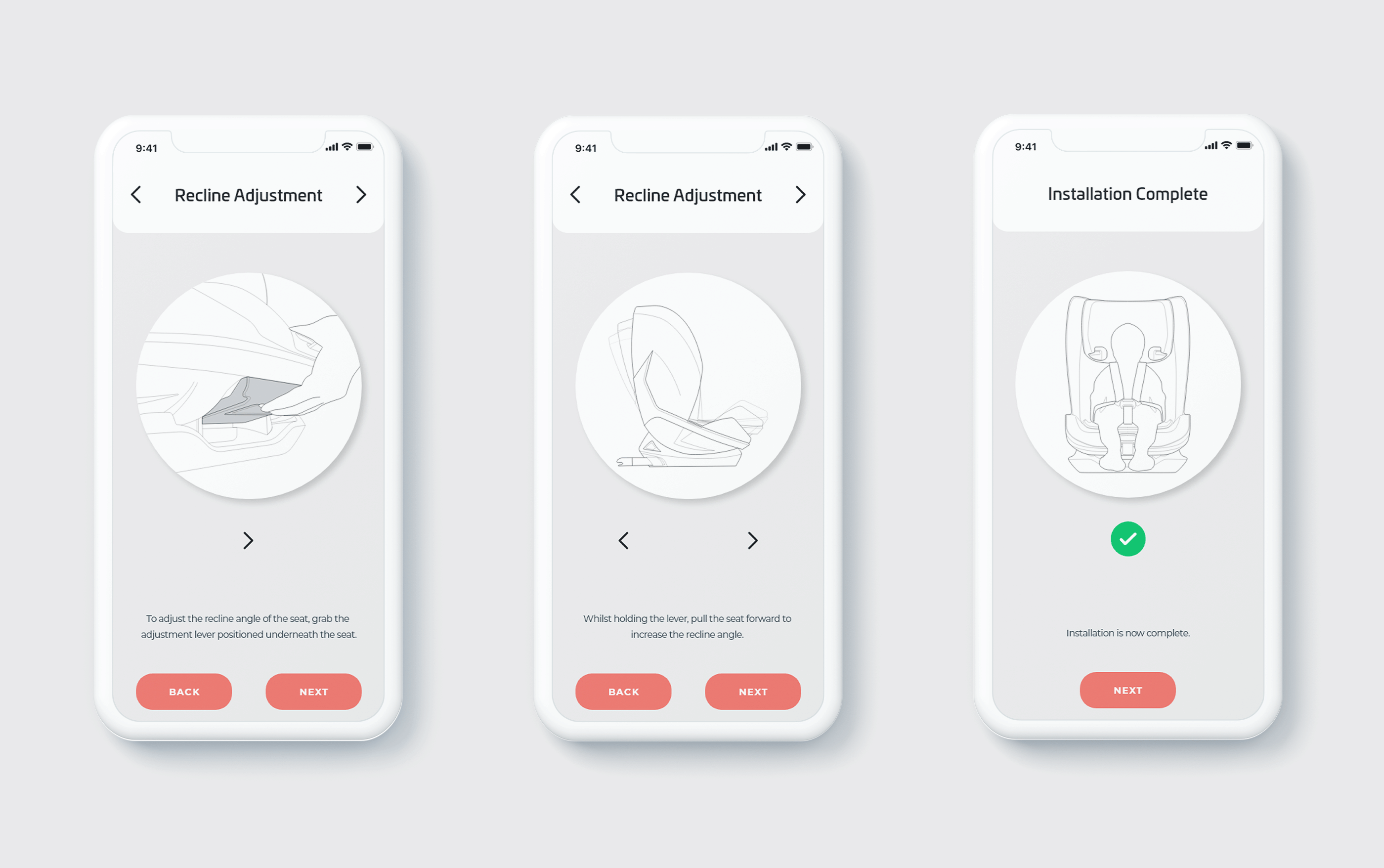 Testing the design with users.

To ensure seamless usability, I conducted user-testing in person with a number of the key stakeholders. To summarise, participants could navigate their way through the app easily and found the informative nature of the content useful and insightful. However testing did detect some pain points for the users.

– In relation to the instructional information, some users highlighted that they found the text to be too small. It wasn’t completely unreadable but felt it could be slightly bigger (see below for refined version).

The next point related to making the app more visually engaging.

– One user wondered whether it may be possible to animate the instructions to show how the particular step in the process should be performed. 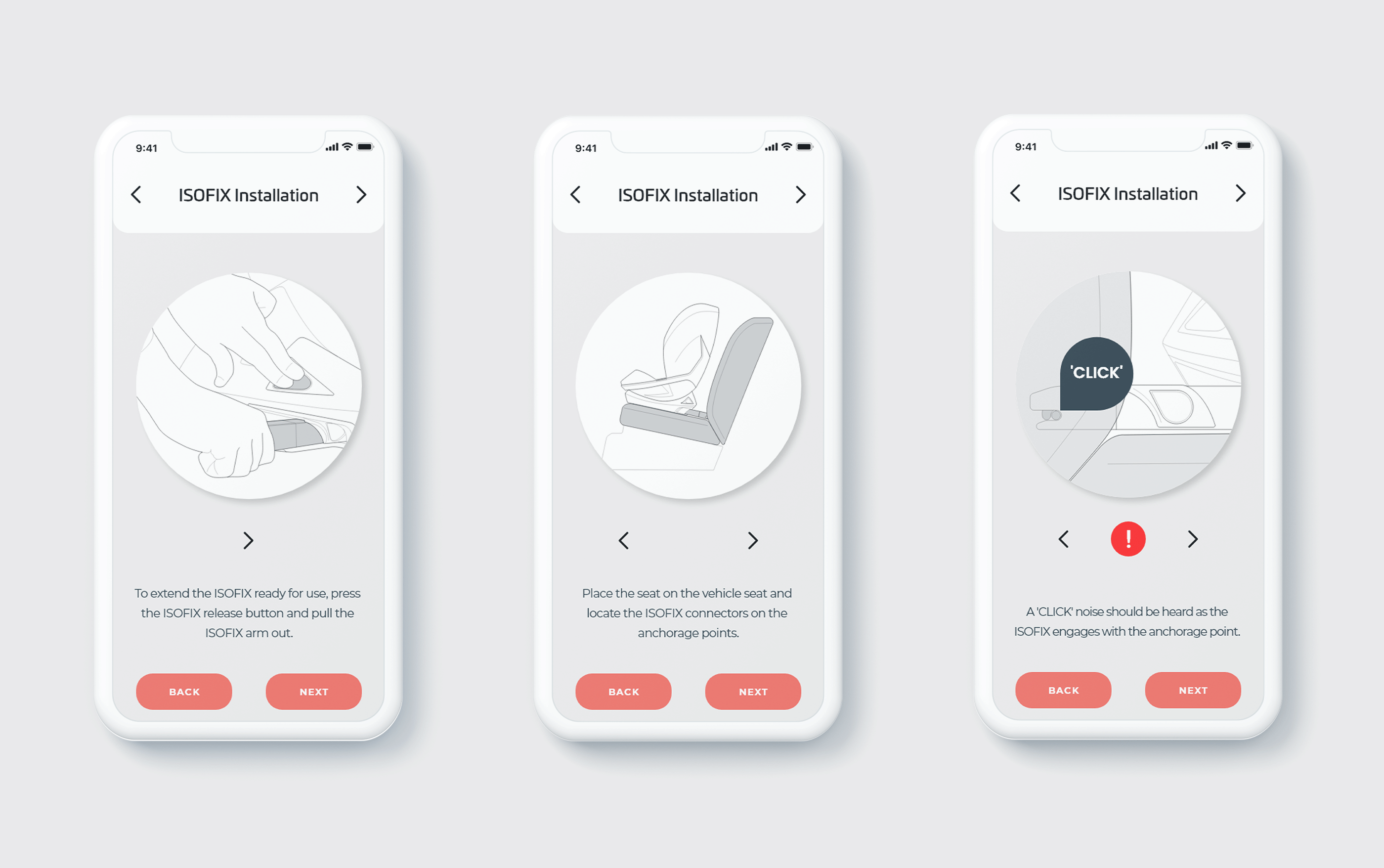 What did I learn from the project?

1. Delving into more detail
As the project was self-directed, it allowed more flexibility in understanding the stakeholders, helping to generate a more valuable level of detail. This meant that the pain points could be better analysed. By adopting a more interview based style of communication – it meant that the users were able to explain examples of issues they found as opposed to answering basic questions.

2. Setting internal deadlines
Despite there being no commercial pressures to work towards, it was important to set internal deadlines to ensure that the project was completed in a reasonable amount of time but also to ensure that a realistic outcome was achieve. I felt this worked well and gave me motivation to getting the project completed to an acceptable industry level.

3. Asking for feedback
When working on as the sole designer on a project, it can be easy to not acquire feedback. In this instance, I regularly put the work in front of the key stakeholders. As they were all non-designers, it gave me a unique insight and also prompted more ideas later in the process. This is something I felt was one of the biggest benefits to the project and something I will factor into the next project.